The Sands of Cyber Time/Chapter 1

Somewhere in some world, there is a place that only a few are interested on. It is filled with a combination of nature and man-made buildings, but the majority of it are filled with trees and plants (e.g. bushes, flowers).

And there goes the existence of someone who happened to wonder about on such place.

[A man] kept wondering around this place. Until he read a sign that has his name on it at the entrance of an open forest.

Nurn checked around the sign if there is anything suspicious that knows his name.

Nurn: It looked like a piece of Wood with the text engraved with it. Even MY own name for some reason.
Nurn: It's almost as if someone expected me to come to this place.
Nurn: ...but I was never even invited to this place nor do I know of someone that expected me to be here.
Nurn: I wonder...

Nurn felt the engraved text with his hand. Every text he felt so far are kept as is in one place until...

Nurn: WAH! *falls down to the ground, sitting on the ground upon landing it*
Nurn: Apparently my name made some fizzling sound when I "felt" it.
Nurn: It seemed that my name looked like it's been "engraved" but apparently it's not. It's more of an optical illusion...

Nurn: ...really creepy though. Not like I would introduce myself to a sign like that!
Nurn: Still, it's impressive how that was pulled off though for such reminder. I wonder how did that sign pull that off...
Nurn: Then again, at least that proved that at least there's people who inhabited in this place.
Nurn: ...or maybe creatures or some "unknown beings" or what not. Not like I would ever seen one of those "things" next.

Nurn: Guess I better get going to see whatever the heck this place is.
Nurn: It may have the power of nature for what it looks, but it seems that not everything are made....natural.

*Nurn moves on and walks around*

Nurn: So... this forest is filled with nature in there. There's like a river somewhere along one of its sides and even some neat assortment of deciduous trees, flowers, and plants. Not like those trees would bear a fruit anytime soon.

Nurn: I wonder what would the entire place could be. Then again, it could be more of an illusion just like that text on that sign...

*Nurn felt those trees, flowers, and plants to check if they are not naturally-made but to no avail*

Nurn: Dang it. They ARE natural. I thought those are mere illusions.
Nurn: Then again...what if those illusions are so good that can also be felt as if they are real?

*Nurn looked around the bush that seemingly has someone on it, but to no avail*

Nurn: Hmm...it makes me wonder if the illusion is wearing off.
Nurn: It seems that something or someone is present around here...

Nurn: I might not be the only one who's in this seemingly abandoned place.
Nurn: ...then again, I'm currently in a forest. What do I expect?

*Nurn checked on the flowing river* 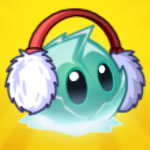