I have no clue what that is... But I'll make it!Shannon

Shannon Brima is a male canine living in Aristol City. They are a secondary character in the story 'Charmean', being a friend of the main character Auggie.

Shannon is an average weighted canine with pale brown and cream colored fur with dark brown body markings and light blue facial markings. They have bright greenish blue eyes. They have upright ears and circular eyebrows. They also have a small muzzle and curly fur. A full body image of them is yet to be created.

Shannon is a modest and charitable person thanks to his grandmother. Her influence on his childhood and overall life formed him into the dog he is today. He frequently wants to hear both sides of a story and tries to make everyone happy and satisfied in the end. Unfortunately, Shannon is extremely cowardly in the face of judgement or failure, and fears upsetting others. He over works himself a lot and tries to always be unbiased and kind. This causes him to be an easy pushover and can be manipulated if done correctly. When he's not committing to his job, he's committed to his friends and love interest. He usually spends his free time going out to eat or visiting his favorite places in the city.

Shannon was born as an only child and grew up in an apartment building. He lived with his parents and grandmother. His parents were normally busy at the start of his life, so he often talked with his grandmother, Armene. Armene had served in the military and was retired, and her experience caused her to slow down. With so much free time and many more years in her life, she took on knitting. One day, Shannon saw his grandmother knitting and was confused as to what she was doing. Armene explained knitting to him and let him try her knitting needles. He broke them after an hour. But, Armene was amazed to see him like it as much as she did. Shannon was given his own knitting needles a week later, and used them non stop. He was slowly developing skills, and even started requesting yarn for Christmas and his birthdays.

School was always a huge anxiety of Shannon's, because he was so scared of being judged for his hobbies. He even pretended to be ill for a week before his first day in an attempt to fake a sickness. He didn't fool his father, and had to go. For the first two hours, no one talked to him because he didn't try to talk to anyone. After lunch time, it was recess. That was when he was at his nervous peak. He really wanted to knit and continue a winter hat he was making, but he didn't want to be picked on for his feminine habit. Shannon sucked in his anxiety and continued his hat, not wanting to look up from his work in case people were staring at him. His peers did end up staring at him, but they stared because they were interested. He only noticed when someone asked him how he was knitting, and asked if they could try. Beaming in excitement, Shannon spent his recess pridefully showing everyone how to knit. He received a respected reputation as the "kid who knits". This reputation caused him to get a few friends. He had a lot of trouble paying for college tuition, but managed to pay for it using commisioned works. 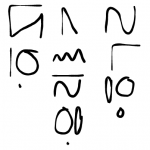