Kingdom of Fun Wiki
Register
Don't have an account?
Sign In
Advertisement
in: Paxadora, TheKrazyStew, WIP,
and 5 more

Not who you were looking for? See Krazy (disambiguation).

Plushzy is a character from Paxadora. He is a plushimatronic that is modeled after Krazy.

Plushzy, as the name implies, is a plush of Krazy. His shape and color scheme is identical to that of Krazy and is able to walk on his own despite being a plush.

Plushzy shares the personality of his animatronic counterpart, Krazy. He tries to look at the positive side of things - however, this is difficult for him sometimes, as he can't talk on his own. Despite this setback, he is usually able to bring around smiles. However, while he cannot talk by himself, he is able to translate words other people have spoken in other languages.

Plushzy was originally supposed to be the result of a showing-off of StewCraft Industries's "Plushimatronic Program". However, due to an error in the construction of his voice-box, Plushzy is not able to talk by his own will. Nevertheless, the public was impressed by this display (mainly due to a change in presentation, to where Plushzy did not need to speak) and soon plushimatronics became widespread throughout Paxadora. A few days after the presentation, Plushzy was given to Krazy-Stew as a gift in return for allowing the plush to be modeled after Krazy. 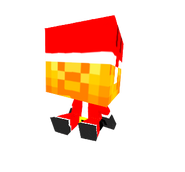 Plushzy in a Santa outfit.

Plushzy and Lovips sharing a mug of hot chocolate.
Community content is available under CC-BY-SA unless otherwise noted.
Advertisement