Kingdom of Fun Wiki
Register
Don't have an account?
Sign In
Advertisement
in: WIP, Female, Good,
and 3 more

Kazumi Gushiken (具志堅 和美, Gushiken Kazumi) is a Japanese girl who studies in Magnificent Tokyo High School. She serves as the president of the Student Council in her school and is the head detective of the Case Solvers, a group dedicated to investigate various mysterious cases, whether in their school or anywhere in Japan.

Transferring to a New School

Kazumi was born in Fuji, Japan through her parents Katsu Gushiken and Masami Gushiken. At the age of three, she and her family resided in Tokyo. Kazumi first enrolled at Spring Garden School starting from Preparatory until the Grade 8. Afterwards, Kazumi's parents made up their minds to enroll their daughter in a different school. Knowing Kazumi will miss her schoolmates and teachers in Spring Garden School, Kazumi didn't oppose her parents' decision because she believed it’s probably time for a change. So at the end of her summer vacation, Kazumi entered in another school called Magnificent Tokyo High School.

Attempting to Fit In

Kazumi entered the school building after her parents dropped her to her new school. She headed straight for the Juniors-D classroom, the section that falls under the D Pilots category in the school and the section that she discovered that she will be in for the entire school year. She occupies an empty seat in the second row of seats in the classroom. After five minutes, Mr. Atsushi Tanaka, walks into the classroom. He introduces himself as the Juniors-D's class adviser and as their science teacher. Afterwards, he gestured for Kazumi to come up in front and face the class upon mentioning her name while announcing all the names of the students in class. Kazumi greeted

Kazumi placing her hands together

Kazumi in her Junior prom dress 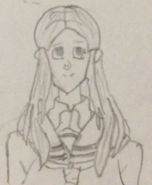