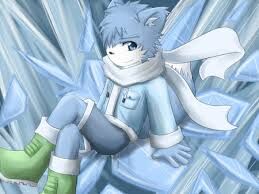 Gilbert was once a human child growing and becoming an ice mage.One day the skies and clouds begins to darkened and the plants and animals begins to wither and die,as they surroundings die a giant dark figure appeared draining the energy and life force of everything almost like devouring everything in it's path,as the situation grows the elders of the village begins constructing weapons known as the The staff of dawn the elders fought the darkness but only one survived the battle the last elder figured out that the darkness cannot die but can only be sealed within a body with a pure soul and the elder can only think of with a vessel to seal the darknesss is Gilbert so the elder sealed the darkness within Gilbert when he was 6 years old,Gilbert knew that there's an entity sealed within him but he doesn't care because he atleast have a friend always been in his side so he could be not lonely but one night when the moon was full the darkness got hold on half of Gilbert's heart and it turns Gilbert's half soul into a wolf then when Gilbert wakes up he started to change until he became a human ice wolf hybrid and because of that the people feared him and make him leave the village after that Gilbert was gone.

Even though Gilbert carries a curse he is always happy,cheerful,and confident.He sometimes act a little childish but is willing to help anyone i need but if someone said a very good compliment on Gilbert his dark side or the entity will control Gilbert,it is known as Dark Gilbert the opposite of Gilbert.

Gilbert can cast dimensional portals and can use the power of ice and snow but he rarely fight but sometimes in fighting he is thinking that this is only a game.