Kingdom of Fun Wiki
Register
Don't have an account?
Sign In
Advertisement
in: Good, Female, OCs,
and 3 more

Anyone who Elementia sides with

Elementia is a supernatural human girl who, after dying four times and resurrecting, earns the abilities to possess the four main elements of the Earth, namely: water, earth, fire, and air.

Not much is known regarding Elementia, but all that she knows, is one day, she woke up, finding herself lying on a flat grass ground. Nevertheless, Elementia decided to roam around every place around her.

One day, when Elementia was sailing down the sea in a boat that she came across by the shore where she left off, rain suddenly poured down hard to the area of the sea she is at currently, followed by the repeated crashing of the waves around her. Her attempt to escape quickly away from the storm failed, as a huge wave crashed on her, which lead to her falling from her boat and plummeting to the water. No matter how hard she tried to reach back to the surface of the water, the waves continuously kept pushing her further and further into the water. In a span of a few seconds, Elementia stopped breathing.

The next day, Elementia woke up, finding herself lying on a pile of kelp. Upon gazing at the top of the water, she quickly stood up and quickly swam upwards, much to her surprise. Upon swimming to the top of the water, she saw signs of land far away from her and decided to swim her way there. When she reached the shore and lay down to give herself a rest, she noticed something odd when she took one look at her reflection in the water: her dress and shoes turned into an ocean blue and aqua colors, her cape into an aqua color, and both her eyes and hair became rather lighter blue. While she is mystified by the change of her physical appearance, she placed her hand on the water, only to find out that her hand did not insert down to the water instead, but rather stayed firmly on top of the water. Curious, Elementia decided to take her hand from the water. She was surprised to see that a small amount of water followed where her hand went. Wanting to find out what could have happened to her, she decided to make simple body gestures to see if any reaction would occur. And there was a reaction, when Elementia slowly swayed her hands, the water below her followed along, and when she stopped, the water stopped as well. For another try, she raised both arms in the air and saw water also rose up in the air. Upon placing her arms down, the water returned back to the locations where it rose from. That was the day she found out that she had earned water powers and decided to give herself her first nickname Aquatica.

For the next few weeks, Elementia traveled from place to place by taking water routes--particularly lakes and rivers. One day, while carefully walking down a soily and rocky mountain, rain slowly appeared. Elementia moved faster, hoping to escape from any danger the rain may possibly bring later on. Elementia spent the next several minutes running and looking for a safe place to reside in. However, the rain poured down harder and soil slowly began to become slippery. Elementia started to slip every few minutes while briskly scaling down the mountain. When she arrived on a wide open space, there was another problem: there were large masses of rocks and broken grounds rolling down from her left side. Elementia attempts to run to the opposite direction, hoping to evade the landslide of rocks. Unfortunately, Elementia slipped while running and while she was regaining her feet, the rocks overran her, fully burying her in the process.

The next day, Elementia woke up to find darkness surrounding her. She frantically moved aside the rocks that were on her and as soon she she made it out, she took one look at herself and gasped: her hair turned into a brown color, her dress, shoes and crown turned into the colors of brown and green and her aqua cape turned into a gray one. Still curious to find out what else may have happened to her, she positioned her right hand in front of her and rose it a little. She noticed some small rocks floating a few feet of the ground so she placed her hand beside her side, and to her surprise, the rocks slowly returned to their positions on the ground. Trying to see another reaction, Elementia stomped her right foot and stumbled when a long streak of cracks formed on the ground. Elementia went in deep thought: she got crushed by boulders but still survived. While moving her hand, she also moved a few rocks. Lastly, when she stomped her foot on the ground, it responded with cracks. Elementia realized that she earned earth powers so she gave herself a second nickname, Earthia.

Afterwards, Elementia traveled through a deep forest in another landscape. During her journey, she discovered that she can switch into her water or earth form at her will and anytime she feels like it. Tired, Elementia slept under the shade of tall tree for hours. She awoke upon detecting the smell of the smoke and was horrified to see the whole forest on fire. The girl quickly got up and start running along the paths to escape the increasing flames. However, the task to flee grew difficult, for Elementia had to encounter the hazards of having to find any path free of flame or anything that blocks it and evading all the falling and burning trees. While running, she noticed a red mountain high in the sky leaking orange liquid. Realizing that the cause of the forest fire is due to a massive volcanic eruption, she quickened her pace.

It turned into a real challenge when trees began blocking Elementia whichever she direction she wanted to go one by one. Additionally, a huge amount of lava was moving closer to her. Suddenly, Elementia tripped and fell hard on the ground. She could have stood up if the lava did not make contact with her feet. Soon lava enveloped her, burning Elementia alive.

Elementia woke up to find herself lying in a mashy gray pool, which seems to be the remaining lava that dried up. She looked around to see the forest dead and down from the previous day's forest fire. Elementia quickly stood up and brushed the remains of the pool off her. She checked her appearance, finding it different once more: her dress, shoes, and crown were in the colors of red and orange, her cape yellow, and her hair gold. Upon swaying her arms to see if she gained another power, thin streaks of fire swayed along with her arms. Sensing another power in her, she waved her right arm quickly in the air to find a thicker streak of fire trailing by. That day, Elementia decided to give herself a third nickname, Fierra.

Blown And Carried Away

Elementia then traveled to another mountain range one windy day. While walking, the wind blew harder and harder until it reached the point that Elementia could hardly stand her ground. She saw a tornado coming by and decided to run to the opposite direction from it. Unfortunately, the tornado moved closer enough to scoop her from the ground and keep her spinning and swirling in the air. Elementia fainted as a result and the tornado brought her to unknown. After several hours, Elementia woke up and found herself lying in a small open plain in the mountain range. The wind is still present but in its serene state. She stood up and examined herself again. This time, her dress, crown, and shoes are in the colors of white and gray, her cape pale light blue, and her eyes light blue, only with thicker hue. Suddenly, when she closed both of her fists, strong wind blew by, which died down when Elementia opened her hands. Upon clenching her fists again, the wind blew by once more, then Elementia opened her hands, causing the wind to die down again. Elementia wave her hand across her, which sent a path of wind forward, as she expected. When she realized that also gained air powers, she decided to give herself a fourth nickname, Airra.

Elementia never gained anymore powers since she had already acquired every elemental power. She still roams the earth, trying out her powers and encountering other creatures and beings.

Elementia possesses four powers: water, earth, fire and air. The following below are the list of skills and abilities Elementia uses depending in which element form she takes:

Elementia's original appearance was long black hair and grass green eyes. She also used to wear a sleeveless long white dress that falls down to her knees. Her appearance drastically changed after her drowning accident. Therefore, Elementia's appearance is now set into four sets of color schemes depending on which element form she is wearing:

Light brilliant cerulean (Note: Her shoes does not include this color in them.)

DRESS, FLAT SHOES, AND A CROWN:

Moderate tangelo (Note: Her shoes does not include this color in them.)

Brilliant red (Note: Her shoes does not include this color in them.)

DRESS, FLAT SHOES, AND A CROWN:

Medium gray (Note: Her shoes does not include this color in them.)

While Elementia is technically powerful, she is still not excused from having any weaknesses. For one, she can only be immune to sharp contacts from weapons or heavy objects in her Earth form. If she gets stabbed by a blade in her three other forms, either she will simply be injured or die, particularly if she gets stabbed in any of her vital organs. For a sample, if a boulder drops on her while in her earth form, she will simply be squished. But if a boulder drops on her into her other three forms, the next thing that will follow afterwards is a real fatal injury. The next one is that any source of the elements of the earth may injure or kill her if she wears the "wrong" element form. To give a sample, if Elementia is blown by a strong wind in her water form, there is a possible chance for her to be blown away if the wind is strong enough, depending on the speed. But if she is in her air form, Elementia will remain unmoved.The third one will be that any element , if a fire hits any part of Elementia's skin in her earth form, Elementia's skin will be damaged, but if she is hit in her fire form, then she won't be harmed at all.

Elementia is kind, friendly, and sweet. She adores animals and considers them as her friends. She is also helpful that she sometimes jumps in to rescue an animal in need or in danger, even a small fish! Elementia is also adventurous, audacious, as well as curious. She enjoys travelling to new places and discovering new things. However, Elementia is sometimes careless, like the time when she slipped during the landslide that lead to her getting crushed to death by boulders. Elementia also exhibits creativity, as she enjoys growing plants or creating earthmade structures. Nevertheless, Elementia exhibits the traits of being powerful and skillful in terms of using her powers and even makes efforts in trying unleashing big ones. 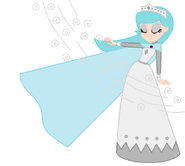