Sharon was Orca animatronic produced for Freddy Fazbears Pizzeria. Intended to be cheap substitute for actually purchasing and managing a real orca Sharon was used instead.

Sharon was popular with the kids. Mainly she could put on the same show as the real orca's could and then be able to narrate what she was about to do. She loved them alot, Played with them and even hopped out of her tank and walked around with them. She was the first to hug and the last to leave a kid under a table to crying. She grab then suddenly and hold them close against her body. Comforting them.

She was all of this before she was scrapped with the rest of toys.

Sharon has had a long history in the Fazbear franchise. Dating back to 1976 the same date as the birth of Jerry Fazbear, who upon shortly after being born was given by his mother a large 3ft long killer whale stuffed animal. As Jerry grew older he used to take that stuffed animal everywhere with him. Unfortunately due to a fire, Sharon was lost when Jerry was six. Following the child murder at the Diner and the loss of his mother, Jerry received from Mr. Fazbear an animatronic version of Sharon, life sized, humanoid, and with the ability to actually submerge underwater without short circuiting.

Following her transformation she was moved into at first pirate cove, before being later moved to tank separate from the main stage. Separate from the others but right next to entrance of the Arcade room, she eagerly awaited kids to move past her tank, hoping to pop her head up when they bother to look in her tank touching them lightly with her snout. When kids began hugging her if they weren't startled by her and broke out in a cry, she'd do a flip for them in her tank. When they would cry she would just smile, and climb out of the water and pick up the crying kid. She'd pull them close, and hold them tightly in a hug, Jerry himself was beside himself with her, she was as he'd imagine her when he had been a smaller child before the fire, and now, he was shocked that she acted so much like he expected her too. But because he was working, he rarely got to see her, and unlike the other animatronics, she stayed in her tank at night, in some kind of sleep mode, so he hardly ever got to see her.

Following unrecorded events that took place in 1984-5, at the Freddy Fazbear Pizzeria's largest location, and second official restaurant, was closing. During the last week, no children showed up so she was soon packed up, and auctioned off at a decent price Jerry never saw her again. 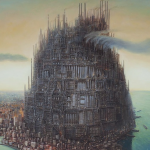